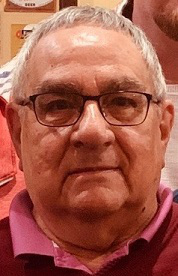 Daniel A. "Doc" Chiara Jr. of Geneseo passed away on February 1, 2020. He was predeceased by his parents, Daniel and Angelina Chiara and his sister, Patricia Chiara Pusateri. Daniel is survived by his loving children, Amy (Keith) Helber of Radnor, PA, Jill (Vittorio) Ettore of Winchester, MA, and Craig (Seanna Anderson) Chiara of Geneseo, grandchildren, Jackson Chiara, Luca and Gabriella Ettore and step-grandchildren, Andrew, Nicholas and Kristin Helber. He is also survived by his sister, Marie (Frank) Leonardo Jr. of Roanoke, VA, his brother-in-law, Robert Pusateri Sr. of Leesburg, FL, his former wife, Susan Schmitt of Geneseo, daughter-in-law, Heather Chiara of Geneseo and his very special friend Denise, as well as many nieces, nephews, great nieces, great nephews, great great nieces, great great nephews and several cousins. Finally, a special recognition to his closest friend, Mark Thielges. Daniel was born on April 11, 1943 in Warsaw, NY the son of Daniel A. Sr. and Angelina Delabarto Chiara. He was a life-long resident of Geneseo and attended all of its local schools, attaining a BA Degree from SUNY Geneseo in 1967. Upon his graduation, he joined Rochester Telephone Corporation (Frontier Communications) and worked there in various management capacities of Computer Information Technology. He retired as a Senior Manager from Frontier in 2001, after 35 years of service. Afterwards, he worked for three years as a Partner of McWains Chelsea of Morristown, NJ, a firm that provides Disaster Recovery Planning Services for medium-sized and Fortune 500 companies. Throughout his career, Daniel was the author or co-author of numerous published materials in the field of IT and principally Disaster Recovery where he was considered an expert amongst his peers. Besides his vocation, Daniel was passionate about spending quality time with his close-knit family, and he especially enjoyed family reunions. He also relished taking trips with his friends to Myrtle Beach, Florida, Las Vegas, Phoenix, and California to vacation in the sun, to take chances in their casinos, and to play on their golf courses. He liked all sports in general, and often attended PGA Tournaments and games played by the Buffalo Bills, Cleveland Browns, Syracuse Orange, and his cherished New York Yankees. In his younger days, he was an avid bowler, played recreational softball and basketball, and was an active golfing member of Livingston Country Club. Daniel was a past member of the Board of Directors of Livingston Country Club and served as its President seven times. He was instrumental in building the additional nine holes at LCC. In 2019, he was inducted as one of the inaugural members of their "Walk of Fame." Daniel was also a past member of Geneseo Kiwanis, served on the Parish Council of St. Mary's Church, and was the first lector of his church. He was also known for lending his assistance to local political campaigns and community projects. Daniel loved the comradery of the Old Men's Coffee Club, cooking spaghetti dinners for the St. Mary's Men's Club, supporting the Geneseo VFW & American Legion Posts, and simply being amongst people of all persuasions. He loved Geneseo! Calling hours will be held on Thursday, February 6, 2020 from 4-8 PM at the Rector-Hicks Funeral Home, 111 Main St. in Geneseo. A Celebration of Life Mass will be held on Friday, February 7, 2020 at 10 AM at St. Mary's Church, 4 Avon Rd. in Geneseo. Interment will be in St. Mary's Cemetery in Geneseo. In lieu of flowers, memorial gifts may be made to the Wilmot Cancer Institute, 601 Elmwood Ave., Rochester, NY 14642.

Share Your Memory of
Daniel
Upload Your Memory View All Memories
Be the first to upload a memory!