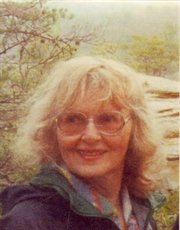 Kucaba, Janet S. Geneseo: October 17, 2008, at age 77, beloved wife and mother. Survived by her devoted husband, John, and daughters Kelley Kucaba (Martin Schewe) of Germany, Eve (James) Donahue of Massachusetts, Julia (Christian) Joseph of Connecticut, and Jennifer Kucaba of Virginia. She graduated from Indiana University of Pennsylvania with a degree in Music Education, taught for several years before marriage, and then dedicated herself to the raising of her four daughters. Janet had a life-long interest in the fine arts. She sang and played piano in public at an early age. As an undergraduate she was a founding member and premiere dancer of the university's Modern Dance Group as well as its first president. She performed in the student orchestra at the Chautauqua Institution and in the SUNY Geneseo College-Community Orchestra, and won prizes for poetry and photography in state and national competitions of women's groups. Active in local community affairs, Janet volunteered in the office of the local American Cancer Society, participated in the Meals on Wheels program, drove patients to hospitals for treatment, conducted children's church choirs, and assisted at various Genesee Valley Pony Club events. As a member of Geneseo's Monday Evening Class, she was involved in numerous committees, served one term as president, represented the group at state and national conferences, and initiated and managed the MEC's annual collection of donations for the BOCES Geneseo Migrant Center. Janet dearly loved the natural wonders and beauty of Letchworth State Park and spent countless pleasurable hours there. On the guided hikes she developed such an avid interest and expertise in salamanders that she became known as the 'salamander lady' and regularly participated in a state-sponsored salamander count. Whether exploring trails, searching for mushrooms, or simply enjoying the spectacular views, in her mind dwelt a deep and abiding appreciation of the foresight of William P. Letchworth in preserving this land for posterity. Friends may call at Rector-Hicks Funeral Home, 111 Main Street, Geneseo, on Wednesday, October 22, from 4 to 7 pm. A private memorial service will be held at the convenience of the family. In lieu of flowers, memorial contributions may be made to Friends of Letchworth State Park, 1 Letchworth State Park, Castile, NY 14427.

Share Your Memory of
Janet
Upload Your Memory View All Memories
Be the first to upload a memory!
Share A Memory
Plant a Tree