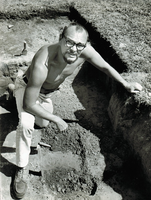 Wendell D. Rhodes, PhD, age 89, of Geneseo, died Monday, January 13, 2020 at his residence. He was predeceased by his wife, Barbara, daughter-in-law, Beverly Rhodes and brother, Gordon Rhodes. He is survived by his sons, Kevin (Beth) Rhodes of Groveland, Mark Rhodes of Canaseraga, Eric (Beth) Rhodes of Linwood, grandchildren, Jessica and Adam Rhodes, Kelly, Joseph and James Bowman, great grandchildren, Rachel and Jaime Bowman. Dr. Rhodes was born October 20, 1930 in Newburgh, NY the son of Harold and Mabel Pilquist Rhodes. He was a US Marine Corps Korean War Veteran. Dr. Rhodes was hired at SUNY Geneseo in 1959 where he was an Emeritus Professor of Anthropology and served as the Chairman of the Department from 1968-1987. He received the Chancellor's Academic Excellence Award for Teaching in 1981. Dr. Rhodes also served as the President of the College Senate at SUNY Geneseo before his retirement in 1989. No prior calling hours. Memorial Services will be held privately at the convenience of the family. In lieu of flowers, memorials may be made to the Dr. Wendell and Barbra Rhodes Endowment, 1 College Circle, Geneseo, NY 14454.